The EU General Court upheld a decision by the EUIPO Board of Appeal in the case of Anta (China) vs. EUIPO, in accordance with which a graphic mark consisting of two lines forming an acute angle, submitted in respect of various goods from classes 18, 25, and 28, does not possess distinctiveness (case No. T-291/16 of 5 April 2017). In this context, it is worth paying some attention to the conditions concerning distinctiveness for a trademark that is purely graphic in form (i.e., that has no verbal component whatsoever), in particular in respect of goods such as footwear and clothing.

The mark submitted was shown in the application as follows: 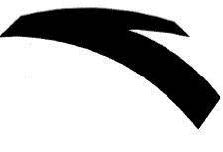 During the analysis of the submission, the EUIPO determined that the mark is devoid of primary distinctiveness, and the mark was therefore not registered. According to the EUIPO expert who conducted the analysis, the mark has no features whatsoever that distinguish it from other marks that are currently placed on articles of sports clothing and footwear.

In order to justify the distinctiveness of its purely graphic mark in respect to clothing, the applicant invoked earlier registrations of marks in other jurisdictions as well as consumer opinions. Yet the court found that the fact that consumers recognize graphic trademarks does not necessarily mean that those marks possess primary distinctiveness. Consumers, then, do not consider such a mark as a trademark unless it has acquired distinctiveness through use in trade.

Not having any characteristic features or other distinctive elements, the mark in question is perceived by consumers as an ordinary decorative element. The mark is not able to draw consumers’ attention such that they will remember it in relation to the goods concerned and associate it with a specific business.