In newly issued court proceedings, the makers of Toblerone have become the latest confectionary manufacturers to seek to protect the shape of their product via 3D trade mark registrations. Following the recent difficulties Nestlé faced in registering the shape of their Kit-Kat bar, Mondelez have commenced proceedings against Poundland in relation to their newly announced Twin Peaks bar. Twin Peaks bears more than a passing resemblance to a Toblerone, except that each chunk of chocolate features two peaks rather than one. 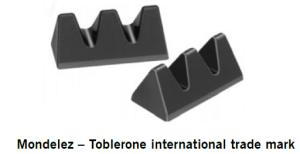 The current legal position relating to shape marks is in the UK Trade Marks Act 1994, which allows for the registration of 3D product shapes that meet the criteria as other types of marks. Crucially, the shape must not be devoid of character or descriptive of the goods. When Nestlé failed to register a shape mark for its Kit-Kat products, it was held that they lacked the requisite acquired distinctiveness, despite the fact that Kit-Kat was considered to be an extremely recognisable brand, thus demonstrating the difficulty of acquiring a shape mark.

The key difference in the case at hand is that Mondelez already own several registered shape marks in Toblerone. However, after the controversial redesign of Toblerone in late 2016, where the space between chunks of chocolate was increased, Poundland have suggested that the brand has lost its inherent distinctiveness. In addition, they have claimed that the backlash to this move has impacted any goodwill attached to the brand.

Poundland’s defence appears unlikely to be successful in consideration of the extensive use that Mondelez has made of its UK trade mark registration in the past five years. In addition, even if the trade mark would be vulnerable to cancellation for non-use, a two-step test would apply in order to assess whether the new shape could be considered as a valid use of the mark or not. The first question is what are the main differences between the original and the new shape, and the second question is if those changes alter the distinctive character of the mark.

In this case, the slight reduction of weight resulted in a longer gap between chunks of chocolate and therefore the rectangular shape and the overall impression is likely to remain unchanged. As a result, the consumers will see the new shape as a close variant of the popular bar, which will still be associated with the brand Toblerone and its manufacturer.

Nonetheless, the enforcement of Mondelez’s 3D trade mark registration would face serious challenges at several levels. In fact, it would be difficult for Mondelez to establish a likelihood of confusion between the two chocolate bars, given that double humps are a notable difference. In addition, case law would suggest that the lack of misrepresentation will not assist their passing off claim.

Certainly, there is a lesson to learn. When a change is made to a trade mark, be it shape, colour, sound or a word, it is advisable to review the IP currently in place, in order to determine if it will still be sufficient or it must be revised to ensure full protection.

By: Serena Totino and Jamie Kershaw