Coca-Cola argued that a ‘fatal flaw’ in Frucor’s application was that the colour of the green swatch submitted with Frucor’s application was not Pantone 376c Green as stated in the application, but rather a quite different shade of green. The trade marks office delegate agreed that the green swatch was in fact a different colour to Pantone 376c Green and held that because the colour itself was defined ambiguiously, this was relevant to the argument that it was not capable of distinguishing Frucor’s energy drinks.

Coca-Cola also successfully argued that the relevant consumer would not perceive that Frucor was using 376 Green alone as a trade mark in relation to its energy drinks when 30% of V energy drinks featured very different colours and those different colours were used to indicate the flavour or quality of the variant or for aesthetic purposes, as pictured below. 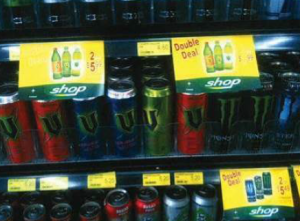 The delegate also accepted Coca-Cola’s evidence that the colour green in particular has been commonly used by beverage manufacturers in Australia for many years, often to indicate the flavour ‘lime’.

Frucor submitted survey evidence in support of its defence, however the delegate was not satisfied that the survey evidence assisted Frucor in establishing that the colour 376c Green had become distincitive of Frucor’s energy drinks by the filing date of the trade mark application. The survey was limited to respondents of a target age who had consumed an energy drink in the previous four weeks, and half of those people did not associate 376 Green with any brand of drink at all. Further, the survey was conducted two and a half years after the filing date of the application.

Frucor has since appealed to the Federal Court of Australia.

The message for trade mark applicants in Australia remains that single colour trade marks are very difficult to register for consumer products, unless the history of use is overwhelming. Where the evidence of use is for a short period and survey evidence doesn’t show universal appreciation of the colour in connection with the brand, registration will be difficult.

By: Chris Round and Zara Lim